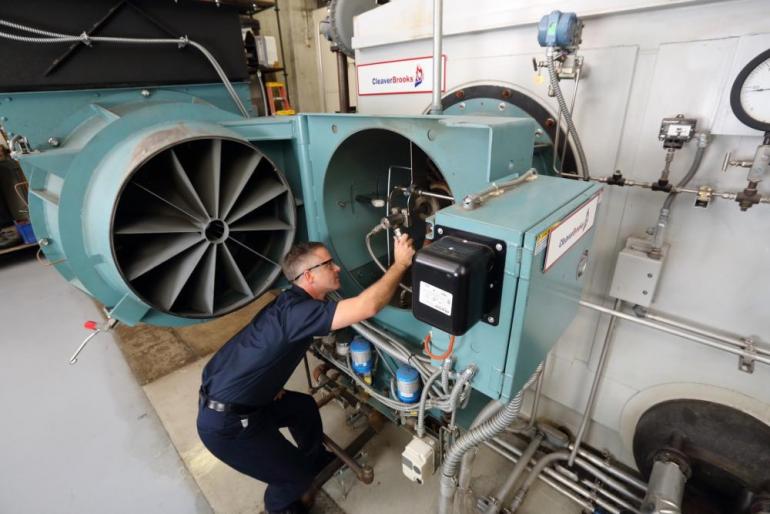 "Total cost." It's best to consider everything when making the long-term commitment to a high-efficiency, low-emissions boiler system for your facility.

There are several variables to consider when deciding what type of high-pressure steam boiler system to purchase. Initially, it is critical to determine the load for the boiler application. This step involves defining the load’s varying characteristics, including: maximum and minimum steaming requirement, current operating pressure required and load modulation.

Determining the proper boiler load is important because when a boiler is oversized for its load, it tends to fire in the lower range (below 50%) where excess air typically is the highest. High excess air causes a 1% loss in efficiency for every 2% increase over the optimal safe oxygen level, which normally occurs in the 80%-and-higher firing range. Steam loads less than the minimum boiler firing rate also cause a boiler to cycle more. This results in an increase in pre- and post-combustion air purging, adding as much as 5 to 10% to the fuel cost based on cycle frequency. Excessive cycling also increases thermal and mechanical stresses on the boiler.

The next step in selecting the correct high-pressure steam boiler for the application is to determine the steam quality required to mitigate problems with moisture (wet steam), which can adversely affect the final product.

After quantifying these initial variables, one is in the best position to select the required boiler output, the proper fuel to be fired, and the best boiler design for the application. 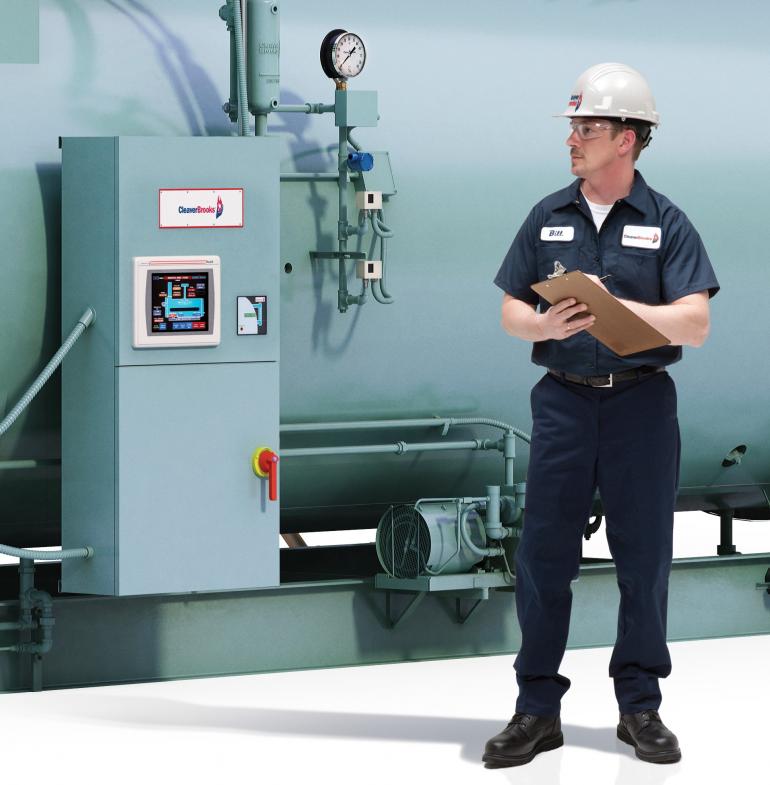 Regardless of the boiler type selected, a boiler should be fitted with the most effective control strategy to meet the needs of the job. Cycling can occur in a properly sized boiler if the load modulates considerably and doesn’t have enough burner turndown to match the descending load conditions. The remedy for this is to have the boiler manufacturer provide a burner that properly matches conditions, such as one with a 10:1 turndown range.

It’s also a good idea to consider the type of fuel/air control being provided. One type is single-point positioning. This system includes linkage arms and rods connected to a single shaft that is controlled by a single motor driving both the fuel and air. While single-point positioning systems are good, they are somewhat difficult to adjust/tune, and after a time, they start to wear and loosen causing the fuel-and-air ratio to drift, resulting in poor, inefficient and unsafe combustion.

An alternative is a parallel positioning system that uses independent, electrically driven actuators mounted on the fuel-and-air control devices. They are tied into a single controller that is easy to set up and delivers consistent, repeatable control. A parallel positioning control can also tie into a PLC-based combustion control system, incorporating it and other energy-saving devices such as oxygen trim, variable frequency drives for the combustion air fan and feed pump motor, and draft control, among others. These devices can be incorporated into a single platform to reduce a boiler’s ongoing cost of operation. In addition, a PLC platform collects valuable data that can be communicated to key personnel throughout the organization.

Having decided on the boiler type, fuel source and control strategy, it is time to further qualify the decision financially. This phase often involves personnel beyond the boiler room walls, typically in finance and operations.

All too often, people try to justify large capital expenditures by using a simple payback calculation based on energy savings resulting from fuel and electrical reductions. This approach normally does not satisfy financial types who are looking for more definitive ways of justifying a capital investment.

For instance, they likely will want to know the net present value (NPV) for the expenditure. This method looks at the expense over a boiler’s lifetime (minimum 20 years in most cases) using discounted dollars, recognizing there are other opportunities for this cash (time/value comparison). If the analysis results in a positive cash flow, it should be seriously considered.

Another financial approach is to look at an investment’s internal rate of return (IRR) whereby the discounted cost of capital, including the company’s tax rate is compared with other possible investments to determine its rate of return against the minimum return “hurdle rate” the company expects for the project to advance. 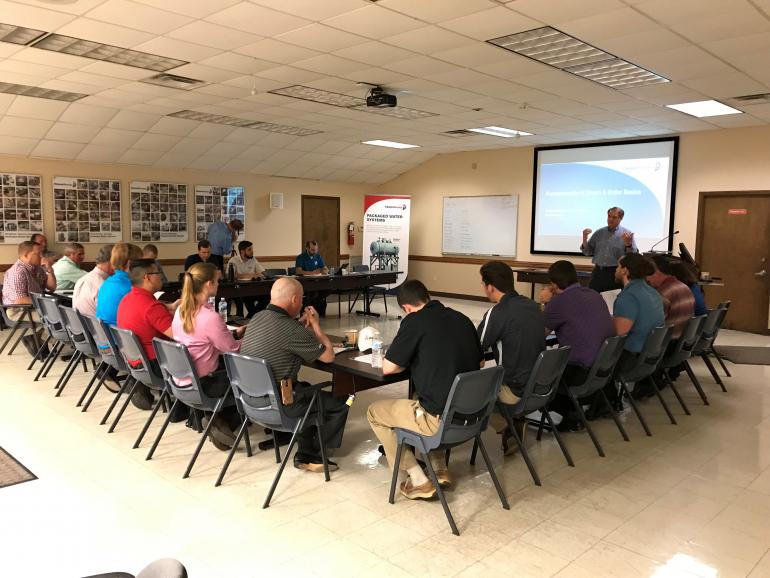 To determine the lifetime costs of a boiler, consider the following criteria:

Initial Cost. This cost Includes the price of the boiler and accessories, which may include components such as a water softener, deaerator, blowdown heat recovery, economizer, etc. Additionally, be sure to include charges for freight to the job and offloading and rigging into the boiler room. Depending on the size of the boiler, these charges can be substantial, especially if final placement requires moving other equipment, pad pouring, and possible floor reinforcement, including the associated engineering cost.

Be sure to factor in utility connections such as fuel, sewer, water, electrical and steam as well as flue gas venting additions such as induced draft fans or other modifications. Also take into account EPA and local compliance equipment that may be needed and testing costs that may be required to obtain a permit. Determine if there will be any insurance cost adjustments and figure in potential downtime costs to the business when the boiler system is installed and set up.

Cost of Operation. The boiler fuel spend generally makes up 85 to 95% of the operations cost in industrial applications. The balance of the cost can be attributed to domestic and potable water heating. In terms of the electrical bill, about 25 to 35% can be allocated to the HVAC component, which includes the boiler and its supporting accessories. This is why it is so important to select the most efficient boiler at the outset, along with options that optimize overall efficiency of the entire operation.

The next major cost of operation is labor, but this cost goes well beyond the number of employees responsible for boiler operation, including salary or hourly rates and benefits. Consider whether the personnel on staff have the proper skill set to run the boiler and its associated equipment, or if they will require additional and ongoing training, and figure this into the total cost.

Downtime. Boiler downtime is an important consideration, especially if the process the boiler is supporting is a “critical load.” If there is a boiler outage, quantify the cost in terms of product waste, and determine the probability of an outage based on historical data. These scenarios must be figured into the cost review. Also consider the costs for local service if the boiler goes down. Identify a certified, local service technician in advance who can get to the facility quickly and with the correct parts to mitigate the downtime. Be sure to include hourly charges for the local rep in the cost.

Maintenance. Preventive maintenance is important and directly impacts the operational cost. Some local reps offer preventive maintenance programs, which are worthwhile to consider. Daily, weekly, monthly, and annual maintenance are critical to ensure the boiler stays on line and performs reliably. For example, one task is a trap surveying procedure to assure the steam lines are free of condensate, and supplying steam, not allowing condensate to back up into the heat transfer unit.

Account for labor costs along with parts and materials needed to complete the maintenance tasks correctly. Often, there is a need for ongoing training to understand the best way to maintain the boiler and troubleshoot its operation. Manufacturers may offer training locally, regionally or have the resources to tailor an on-site program. A few manufacturers have a dedicated training facility for classroom instruction and hands-on reinforcement. Obviously, there are costs associated with training; however, training is very important and should be weighed against the probability of an outage, the cost of which can be substantial in many cases. 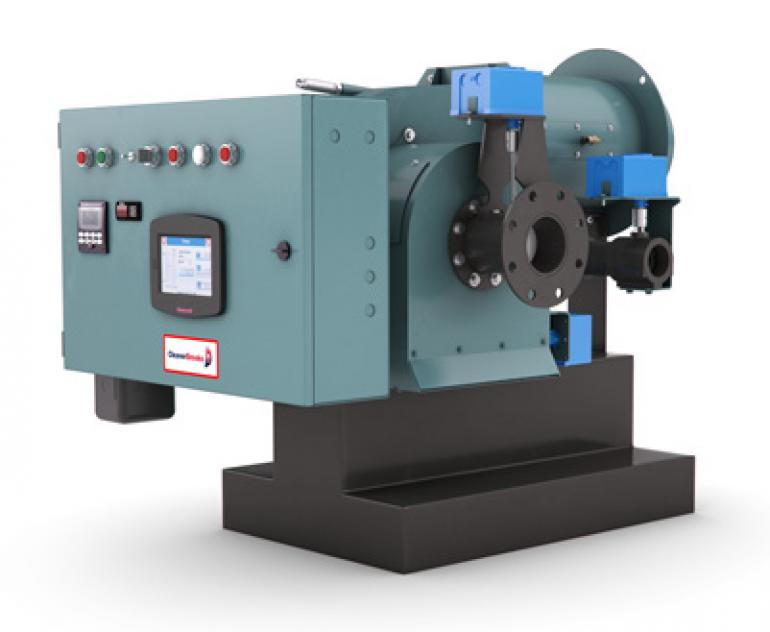 Output Quality. This area is often overlooked when considering a boiler’s lifecycle cost. It involves the steam quality from the boiler’s outlet and the amount of moisture contained in it that may adversely affect the process.

Typically steam produced by a firetube boiler contains about 1.5% moisture. If it is not removed, it can reduce the heat transfer in process equipment such as heat exchangers and jacketed kettles.

Conversely, industrial watertube boilers typically have steam drum internals to combat this problem, delivering steam quality with as low as .5% moisture. As noted earlier, this advantage comes at a cost. An industrial watertube boiler is more expensive than a firetube unit. Note that a firetube boiler can be fitted with a steam baffle in the shell to reduce the moisture and/or the piping directly ahead of the boiler’s outlet, and it can include a steam separator. If these options are desired, they should be figured into the initial cost.

Effluent flows out of the boiler stack, which must be considered in light of various regional and local clean air sanctions and EPA regulations limiting pollutants especially nitrogen oxides (NOx), which are precursors to photochemical smog. Based on the emission limits that need to be met, certain controls may be required and should be added to the initial expense of the unit.

A low NOx burner can also meet a low NOx requirement. If a boiler vessel is in good shape, replacing a boiler’s burner can be an option to meet current emissions standards while also increasing efficiency.

Residual Value. When a boiler reaches the end of its useful life, which is generally about 20 years for a well-maintained boiler, there is a removal/scrapping cost, which in some cases can be offset by the boiler’s residual value.

Boilers in decent shape may still have value. Businesses, including boiler rental companies, may be interested in an older boiler of a certain size and design. If the boiler can be sold, there is a cost offset, thereby reducing the overall cost of ownership.

Remember, the initial capital spend is only the beginning, and the amount of cash spent in operating and other costs over a boiler’s life need to be considered to make the wisest financial decision. Be sure to do your homework and select a boiler from a manufacturer known for engineering and building integrated boiler systems that perform in the most efficient, energy-saving manner.

Based in Milwaukee WI, the author is a senior technical consultant to Cleaver-Brooks and an expert in steam- and hot water-generation. Active in this industry for more than 50 years, Connor recently retired from Thomasville GA-based Cleaver-Brooks as its Director of Technical and Marketing Services.

This article appeared in the June 2018 issue of HPAC Engineering.