The Climate and Clean Air Coalition (CCAC) was recognized today with an Ozone Award for Political Leadership for efforts that led to the adoption of the Kigali Amendment to phase-down hydrofluorocarbons (HFCs) under the Montreal Protocol.

The award is given to key individuals and organizations that contributed most to bridging gaps, building consensus, and providing the inspiration and political guidance over the last several years of discussions and negotiations that led to the adoption of the Kigali Amendment. The winners exemplify the power of cooperation on large and small scales to accomplish goals and produce tangible change.

Since its inception in 2012, the Climate and Clean Air Coalition’s partner countries and organizations have pushed for the phase-down of HFCs under the Montreal Protocol. The Coalition worked to ensure the October, 2016 adoption of the Kigali Amendment, which will do this. 14 Coalition countries make up the 21 countries that have since ratified the amendment, meaning it now has the 20 countries needed to go into force on January 1, 2019.

Helen Molin Valdés, Head of the UN Environment hosted Climate and Clean Air Coalition Secretariat said the Coalition was honoured by the award.

“The Coalition is proud to have played a key role in the adoption and ratification of the Kigali Amendment and we continue to encourage all CCAC partner countries to ratify this important amendment as soon as possible,” Ms. Molin Valdés said. “To receive this award on the 30th Anniversary of the Montreal Protocol, the most successful environmental treaty ever, is an added bonus. We hope that through the Kigali Amendment, the Montreal Protocol will do for HFCs what it has successfully done to reduce ozone depleting substances.”

“We now move to the important task of phasing down these powerful climate forcers. We will continue our work on real world testing and distribution of alternative cooling technologies, and helping all countries transition to climate friendly solutions.” 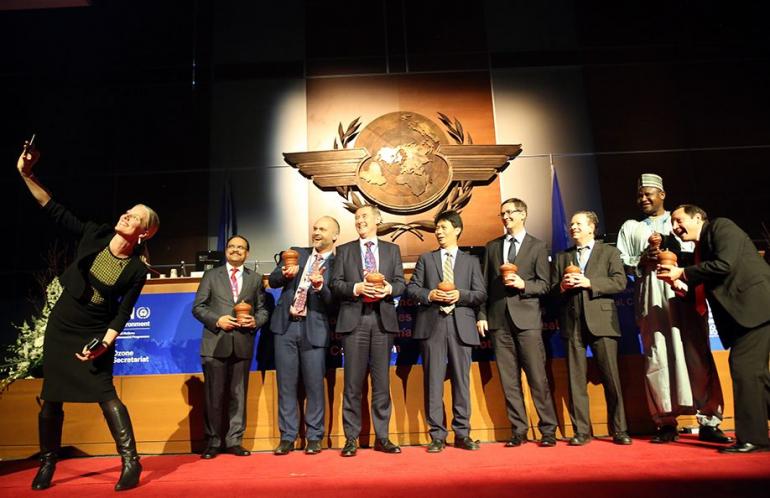 Winners of the Political Leadership Award pose for a selfie with Catherine McKenna (1st on the left), Canada's Minister for Environment and Climate Change. Nathan Borgford-Parnell (3rd from left) accepted the award on behalf of the Coalition.

Romina Picolotti, Senior Counsel at the Institute for Governance & Sustainable Development (IGSD), a key Coalition partner in efforts to reduce HFCs, said the implementation of the Kigali Amendment will avoid 0.5˚C of global warming by the end of the century.

“Coalition Ministers were at the forefront to encourage the world to get the Kigali Amendment, which is the most important mitigation treaty with universal membership that we have today,” Ms. Picolotti said. “We are working hard with these courageous ministers to double the development and climate benefits by ensuring that energy efficiency is increased as we phase-down this super greenhouse gas. Climate change is an existential threat, it is our responsibility to focus our efforts to deliver fast mitigation at scale now. This is exactly what the Kigali Amendment will do."

The Ozone Awards are given by UN Environment’s Ozone Secretariat. In celebration of the 30th anniversary of the adoption of the Montreal Protocol, the Ozone Secretariat and the Government of Canada, hosted the Ozone Awards at the Twenty-Ninth Meeting of the Parties, in Montreal, Canada. The awards recognize the extraordinary commitment and contribution to the progress and achievements of the Montreal Protocol in the past 10 years.

Coalition efforts on the adoption and ratification of the Kigali Amendment

Reducing HFCs has been a core component of the Climate and Clean Air Coalition’s work since its founding.

At the United Nations Climate Summit in September 2014, the Coalition called on governments and non-state actors to support an amendment to phase down HFCs under the Montreal Protocol, take action to promote public procurement of climate friendly alternatives, and welcome complementary private sector-led efforts to reduce the use and emissions high-global warming potential (GWP) HFCs in order to reduce global emissions by 30-50% within 10 years. This Action Statement and Plan was endorsed by 34 nation-states and 24 non-state entities.

hese commitments and other efforts of the Coalition were showcased as part of the Lima-Paris Action Agenda and during the Short-Lived Climate Pollutants Day at COP21 in Paris in 2015. At the Coalition’s High Level Assembly on 8 December 2015, ministers affirmed their strong support for an amendment of the Montreal Protocol through the Paris Communique.

In July 2016 the Coalition organised a special executive session of its High Level Assembly (HLA) in Vienna attended by ministers and high-level representatives of 25 countries who took a strong leadership role to facilitate the adoption of what would become the Kigali Amendment. At the meeting, the Coalition released its Vienna Communique to reiterate its strong support for the adoption of an ambitious Montreal Protocol amendment that includes an early freeze and rapid action to phase down HFCs.

The CCAC’s HFC Initiative brings together governments, private sector, and intergovernmental organizations to share knowledge and strategies for developing, deploying, and promoting climate-friendly technologies in an effort to transition away from high-GWP HFCs and minimize HFC leakages.

Capacity building activities – including technology conferences and exhibitions, interactive partner tools, and case studies – have increased knowledge of available technologies in a number of sectors, including refrigeration and air conditioning, and provided information on policies that promote development and deployment of these alternatives.

HFC surveys in 14 countries provided the first comprehensive set of data and information on HFC use and consumption in developing countries. A Feasibility Study for District Cooling in Maldives was also completed to explore HFC phase-down solutions. Three ongoing demonstration projects in Chile, Jordan and India showcase the possibilities of HFC alternative technologies in commercial refrigeration and mobile air conditioning and will provide information on the performance and energy use associated with these alternatives.