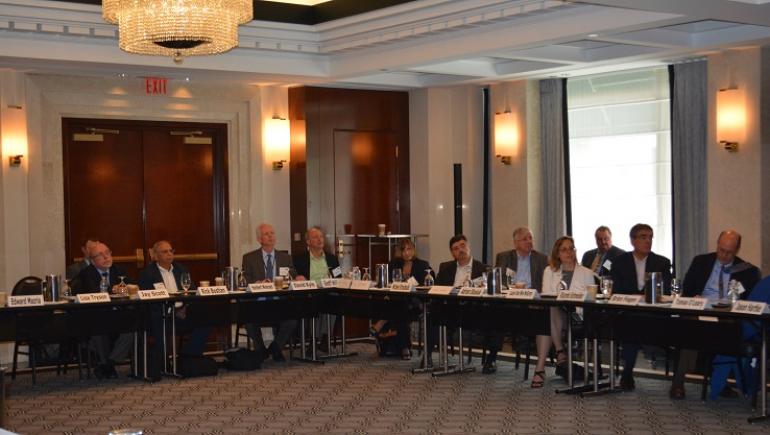 Danfoss recently hosted its 29th EnVisioneering Symposium, “Building Delivery: The Nexus of Market Transformation,” in Washington, D.C. The event convened leaders from the HVACR and buildings industries, policy, research and education, and energy-efficiency advocacy groups to discuss how high-performance buildings can be delivered at the pace, precision, and volume required to transform the buildings marketplace.

“The industry has had broad discussion lately about the shift from building component improvements to holistic or system strategies in the pursuit of the next level of energy efficiency — but another shift is occurring: from performance understood as energy efficiency to performance understood more comprehensively,” stated Lisa Tryson, director of corporate communications and public relations at Danfoss, in her opening remarks. “Energy performance is essential, but economic growth, air quality, life experience within the building, lifecycle cost, and resource utilization are all critical themes now entering the equation.”

Over the next 15 years, U.S. urban population growth is expected to exceed total population growth, signaling a dramatic increase in demand on and for buildings. At the same time, 533 cities worldwide are now reporting greenhouse gas (GHG) emissions — a remarkable increase of 70 percent since the Paris climate agreement was signed in late 2015.

According to Edward Mazria, founder and CEO of Architecture 2030, the United States has leveled out building sector energy consumption, but has not yet significantly decreased them. He then laid out a three-pronged solution for reaching existing zero net carbon targets that included the use of high-performance design in new buildings, deep energy retrofits in existing buildings, and renewable energy via incentives for those buildings unable to implement deep energy retrofits.

“We need to dispel the myth that high-performance buildings are more expensive to design and build,” Mazria said. “In new buildings, it’s possible to find easy tradeoffs in design that make energy efficiency very affordable. And in existing buildings, energy efficiency improvements cost approximately 75 percent less when undertaken at a building’s intervention point or major renovation.”

“For this to work,” Mazria proclaimed, “bottom-up leadership is absolutely critical and goes hand-in-hand with better education of the buildings sector and academia.”

A market-optimized policy, whereby advanced codes are adopted on the local level, also is necessary. Mazria cited cities like Palo Alto and Santa Monica which have already started to improve commercial and residential building codes, respectively.

Richard Swett, co-founder and CEO of Climate PROSPERTY Enterprise Solutions and former U.S. Ambassador to Denmark, noted that the key to energy performance decisions lies within benchmarking. “We need measurable ways of monitoring and reporting,” he stated. “We need to be able to capture the ‘big data’ within buildings in order to review, analyze, and improve. Historically, buildings were not built to be machines. But that is changing.”

He laid out the blueprint for a collaborative building modeling tool that compiles in one single platform the functionalities of several existing tools and would enable architects, engineers, owners, and any other stakeholder to manage and verify everything from building programming and design to construction and operations.

“Changing minds is affected by the ability to show trends and prove opportunities,” remarked Ambassador Swett.

“The city’s goal is to lead the world in green building design and construction,” explained Pander. It employs a strategy that dictates 100 percent of energy originate from renewable sources by 2050. Additionally, all new buildings are required to have zero operational GHG emissions by 2030 — or earlier.

Thus, Vancouver’s Zero Emissions Building Plan was developed, which includes incentives for private sector leaders striving to reach zero emissions buildings and investment in tools to improve knowledge-sharing and remove barriers. It also requires city leadership; all new city-owned buildings pursue Passive House certification and serve as an information source for future projects and as a means by which to inform regulation and remove barriers.

According to Nicholson, who has built a business model around this integrated design principle, the performance of these buildings is predictable and the results certain. The buildings are durable, comfortable, and healthy. They therefore represent superior value and can command better prices/rents, lower vacancy rates, lower utility bills, and less maintenance and equipment replacement. And, they can be delivered at “near first cost parity.”

But, the keys to achieving first cost parity, he argued, include design expertise, knowledgeable tradespeople, component economies of scale, and a locally-based supply chain. It is through these deeply energy-efficient buildings — and superior value — that that market can be truly transformed.