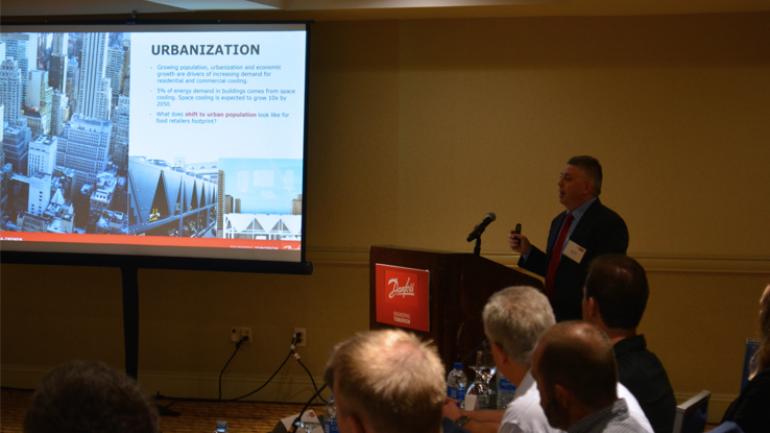 Refrigerant regulation, codes and standards, emerging technologies, megatrends shaping the marketplace and online shopping and the responses it has produced were the central topics for the latest Danfoss EnVisioneering Symposium held September 26 in Atlanta, Georgia. Thought leaders and practitioners from industry, utilities, advocacy and policy gathered for presentations and roundtable discussion to explore the changing dynamics in food retail.

The message was clear: deep uncertainties obscure the even deeper shifts that everyone senses but no one can definitively assess. Any realistic read of the future of food retail has ambiguity as it centerpiece. If an overarching strategic recommendation emerged, it was likely “stay alert, flexible, and engaged.”

Kevin Fay, executive director of the Alliance for Responsible Atmospheric Policy, launched the discussion with a far-reaching sketch of the regulatory scene. The transition to low-GWP refrigerants is well underway and the industry is now amid its third shift in key technologies since 1980. The Montreal Protocol, perhaps the world’s most successful treaty, set in motion a concern for HFC refrigerants, but its first goal was to address the atmospheric ozone crisis, in which HFCs played a large role as non-ozone-depleting substitutes. The recent Kigali Amendment to the Protocol, however, ratified by 48 countries, shifted the goal to addressing climate change. That meant moving out of high-GWP HFCs—which in turn meant a major technological challenge. HFCs were, in many respects, the least easy refrigerant option.

As the Kigali process moved forward—toward a phase down, not a phase out, research and experimentation were needed to identify options and, most importantly, link options to specific applications. But implementation would mean deep retrofits—and big investments. Industry leaders needed to confront the question of whether enough is known, or could be known, to justify the commitments required for action.

The first ambiguity to emerge was just how fast the regulatory transition would move. Today, the US Administration is less concerned about climate change and atmospheric carbon than its predecessors, and more concerned about cost to consumers. States—especially California—are moving into the regulatory field independently of the national government, so the risk of a “Balkanized” domestic marketplace has emerged, with regulations varying state to state across the country. And the upcoming midterm elections could have a yet incalculable impact on thinking in the US regulatory community.

Charles Hon of True Manufacturing provided an in-depth look at the micro-level impact of regulation. SNAP rules 20 and 21 aim to drive down use of high-GWP refrigerants and blowing agents, but what the federal courts will say about moving ahead with those regulations is unclear, and states like New York, Connecticut and Maryland are following California’s lead—each with its own deadlines. If Kigali is not ratified, and the US has yet to do so, costs around the world could surge in the US and negatively impact trade and jobs—and possible product shortages. Hon looked to industry to step forward to force decisions, noting he believes the window for action is no more than five years, and underscored the number of contingencies and incalculables. He joined Fay in painting a landscape of ambiguity and risk—but also of opportunity for action, with more than 30,000 new manufacturing jobs at stake and a $12-billion balance of trade position improvement on the line, along with tariffs and the movement of investment capital to other countries.

Technological solutions in refrigeration offer an island of greater certainty amid the shifting scenes: progress is being made toward high efficiency solutions. Paul Bard of Weis Markets outlined how industry partners in the EPA’s GreenChill initiative have deployed new technologies to dramatically drive down leak rates—designing out possible leak points so the reductions and overall performance are sustainable—and achieve dramatic energy savings. Further, he shared details of the company’s first CO2 transcritical system that was recently installed and is yielding results better than expected, with kW usage 20 percent less than other stores.

Danfoss’ Hans Ole Matthiesen, director food retail segment marketing, then sketched the possibilities of a new multi-ejector solution that enables CO2 deployment in warmer climates. The ejector technology’s utility is rooted in several properties of CO2 that can be addressed by the solution to improve the cycle and reduce energy consumption on the warmest days—thereby supporting load shifting, heat generation and balancing of power to de-regulate the grid. Such innovations empower supermarkets to help meet both climate and electrical power management goals.

Noting that 90 percent of data available today was collected in the last two years, Danfoss North America Sales Director Peter Dee suggested that a new era has opened in which digitalization, the “electrification of everything,” the push for a safe and sustainable food supply and similar large-scale trends offer a new range of possibilities and opportunities—especially for confronting the challenges of sustainability.

Among the most significant is the path opened to integrating stores in their internal energy utilization, and perhaps generation, systems into the electrical grid and larger power generation network. More broadly, the underlying technological developments permit a new approach to the relationship between food and the built environment, one in which food waste is radically reduced, energy use is optimized and global sustainability goals are achieved through the data-enhanced ability to better control equipment along the food chain—all enabled by smart store technology, connectivity and cloud-based solutions.

One sub-trend of digitalization, however, presented the most pressing challenge to the retail food industry: online shopping. In selected food subgroups, online shopping has made enormous strides. Canned goods and pantry items, for instance, have seen a strong shift to online—28 percent of online food purchases are from those categories, and online food buying has surged from $6.2 to $12.6 billion between 2013 and 2017. Total market share for online food purchases is expected to balloon from 1.3 percent in 2014 to between 20 and 30 percent by 2022—just four years from now.

The statistics foretell a massive restructuring of the industry, impacting the shape of stores, the nature of industry finance, the industry’s human resource profile, performance pressures, operational priorities and equipment requirements.

A key to the future of online shopping, the discussion highlighted, is the concept of trust; as shoppers become convinced (or not) that they can rely on online avenues to meet expectations, the chances of a major shift in the basic structure of the grocery industry increase (or fall). But traditional competitors are not sitting idle. Instead, they are developing new options—such as quick store pickup and home delivery—that may be better tailored to customer needs. The experiments are being run in real time and their outcome is today still unknowable.

The symposium discussion brought to light a wide variety of forces impacting retail grocery companies and the organizations that serve them. Regulation at the global, national and state levels are interacting in new and unpredictable ways. The industry is being shaped and reshaped by shifts in policy and politics at all three levels. The trends are not hard to discern but the outcomes are over the horizon.

While technologies are making possible powerful solutions, the incentives to invest are flickering on and off. Is jumping ahead a way to get in the lead or an invitation to invest in equipment that solves what could prove to be the wrong problem? Alternatively, is maintaining status quo an act of prudence in an uncertain world or an unwise abdication? And more broadly, how can a business leader make decisions when so much is not only unknown, but also unknowable?

Finally, how will the “era of disruption” that technology and the megatrends it has inspired impact retail food? That disruption is coming seems not in doubt. The grocery industry of tomorrow will be quite different, and tomorrow is not far away.

The 32nd Danfoss EnVisioneering Symposium opened such questions, brought them to the fore systematically and provided a unique opportunity for industry leaders to explore them together. Yet, their answers lie somewhere in the future—in the judgements made by market leaders and in decisions by the real “end user,” the customer.