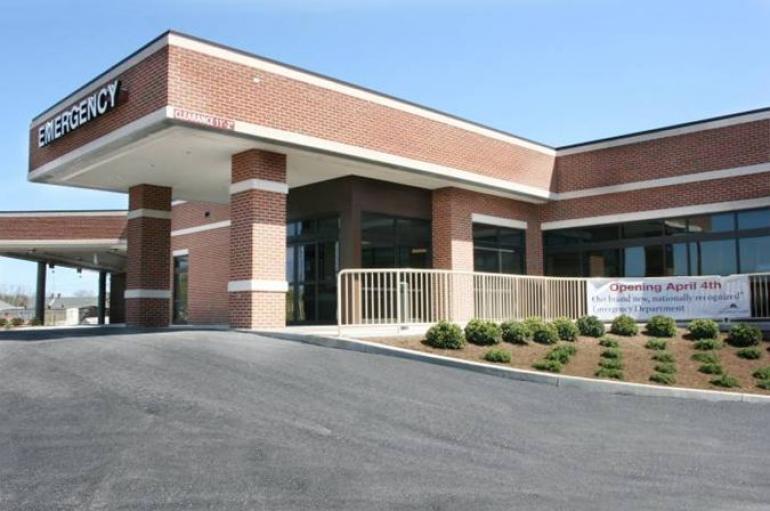 Constructed in 1921, WellSpan Gettysburg Hospital in Gettysburg, Pa., has undergone a number of changes over the years. According to Joe Lehigh of the facility’s engineering team, the most recent were made chiefly to improve hospital operations.

“The key need was to modernize mechanical systems that would assure reliability of critical patient-care functions,” Lehigh said. “High on the list was cooling equipment that had close ties to operation of our clinical and catheterization labs, sterilizing, the critical-care department, operating rooms, and maternity-ward functions—all with no room for errors that could lead to downtime.”

At the very top of the list were the hospital’s cooling towers.

“Replacement of the towers was a five-year effort,” Lehigh said. “Early on, we identified a need and began preparations. At first, we considered a retrofit to the existing 30-year-old cooling towers. Another approach would be to replace some of the evaporative coolers.”

The evaluation process, Lehigh said, “felt at times like trying to assemble a jigsaw puzzle, not knowing if we had all the pieces.

“The old cooling towers, with 900 tons of cooling capacity, were reparable—at least some of them were—but at considerable cost,” Lehigh said. “Plus, there was the need for ongoing maintenance. New cooling towers offered many advantages, yet the higher price tag became the obstacle.”

When the possibility of an expansion of the hospital materialized, the need to replace the cooling towers became clear, as the increase in cooling capacity needed for an expansion was not achievable with the current equipment.

WellSpan Health and the engineer of record, Elkridge, Md.-based Leach Wallace Associates Inc., formulated a plan to replace the failing equipment within the existing footprint and provide additional capacity for N+1 redundancy. According to Matt Peffley, project manager, Leach Wallace Associates, multiple schemes and versions of the design were reviewed with several equipment manufacturers. The firmly defined space—the existing cooling towers were constrained on all sides by brick walls—and the need for 1,200 tons of evaporative-cooling equipment negated all but one manufacturer, Evapco Inc.

“Clearly, the new coolers would need to meet their need for evaporative cooling and also have the additional capacity for a new 300-ton chiller needed for the hospital’s anticipated expansion,” Juergensen said.

“The old cooling towers were installed at different stages of the hospital’s growth, and this added somewhat to the mechanical challenge, but the key obstacle to overcome was the need for greater (evaporative cooling) capacity within the size of the space we had,” Juergensen added.

“At Evapco, we were introduced to a team of folks who took our challenges seriously and helped us find just the solution we were looking for,” Allan Jordan, job-site supervisor with James Craft & Son, said.

Specified for the hospital were two Evapco AT induced-draft, counterflow cooling towers rated for 2,063 gpm, each with two modular 300-ton (6 MBtu) cells, for a total of 1,200 tons, or 14.4 MBtu of evaporative-cooling capacity. Space for WellSpan Gettysburg Hospital’s new cooling towers was tight.

With the smallest footprint in the industry for coolers of their size, the AT towers provide external access to fully enclosed motors and belts. Attached to the motors is Evapco’s heavy-duty Power-Band drive system with aluminum-alloy sheaves and pillow-block bearings, which have a guaranteed life of 75,000 hr, and an aluminum-alloy, statically balanced, variable-frequency-drive- (VFD-) controlled 25-hp fan.

The cooling towers also have galvanized-steel ladders and platforms for service and maintenance and easy access to fan motors and water-distribution components.

“With Evapco, the ease of service and maintenance is a big improvement over our previous system,” Lehigh said. “Before, we had to crawl into our old units to maintain them. Now, everything’s available from the exterior.”

The new cooling towers were installed on a hot day in early September 2016.

“Replacing cooling towers during a summer day is quite rare, almost unheard of, and for good reason,” Lehigh said. “But, ultimately, it was where we landed after so many months of planning and preparation.”

Lehigh said Jordan and his crew were up to the task.

“Allan informed me that, because of all the pre-fab work they did at the shop, they needed only one welded joint on installation day,” Lehigh said. “His technicians had already prepared and installed as much of the 14-in. condensing-system supply and return piping on site as they could, with every other component considered for pre-fab. They also installed most of the necessary piping for expansion of the hospital—ready for when that day arrives.”

The future-ready piping, along with an additional tower cell, will provide 300 tons of extra cooling capacity.

“In reality, there are four (new) cooling towers, not two,” Jordan said. “Each ‘module’ acts as its own system. They’re identical, separate, and singly functional. There are four fans, four sets of valves, and four level controllers.”

“We were very specific about the way we wanted to optimize how the towers functioned—for operational advantages and energy efficiency,” Gurreri said. “Because each tower is paired with a VFD, we dial in optimal N+1 operation. On a given day, the facility may need only 900 tons, but we have a full cell for redundancy, as well as to assure peak efficiency operation of the entire system by modulating down the fans’ speeds.

“We installed Schneider Electric controls to connect all facets of the mechanical system,” Gurreri continued. “There’s valuable flexibility in how we apply it. We chose dynamic functionality, a capability that’s dynamic. It’s constantly evaluating all of the variables and making decisions to assure dependability first.

“Of course, another important function of the control system is to govern and select system function to assure the greatest energy efficiency,” Gurreri added. “For instance, conditions may call for operation of one cell (or modular evaporator section) at 100 percent. Instead, two cells in this instance are tapped at 50 percent each, hitting operational sweet spots. The controls could allow the same level of flexibility if three or four cells were involved, not just two.

“This also involves constantly automatically re-establishing setpoints based on ambient and system conditions to keep things running at peak efficiency,” Gurreri concluded. “I’ve watched as 20 kW is peeled off of the chiller’s screen by manipulating tower function. By allowing the controls to lower setpoints based on outside conditions, the more energy-efficiently the mechanical equipment operates.”

In addition to the goal of saving energy, tower-fan speeds are programmed to ensure limited and even wear on motors, belts, and bearings.

Because the two towers have four cells, four VFDs, and four fans, the system acts as though there are four towers. Each can be isolated easily. This is ideal for maintenance, as, when any part of the system is shut down, the other parts can ramp up to compensate.

“Or, in a failure scenario,” Gurreri said, “the control system can automatically shut that cell down, lock it out, and then notify us that service work is required.”

In the bowels of the hospital, one floor below the grade-level entry, are the chillers, water-treatment equipment, and pump stations. Included are three 945-gpm base-mounted cooling-tower condenser pumps and three 756-gpm base-mounted pumps from Taco that ensure constant flow of chilled water to and from the hospital’s 22 air-handling units (AHUs), which range in size from 10 tons to 120 tons. It is here that Lehigh wears an expression of hard-won satisfaction.

“Important, sometimes life-saving, work goes on every day in any of the floors above us,” Lehigh said. “Yet, down here—and now out on the rooftop—are the new and improved systems that make it all possible. A lot of planning and a lot of work and the right systems all came together.

“Now,” Lehigh concluded, “we know that the facility’s ultimate mandate—no downtime—is as close to a full guarantee as we can make it.”