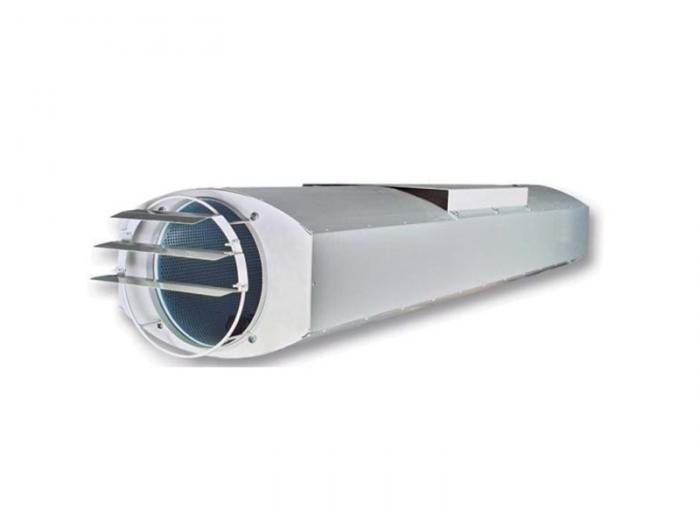 Jet Ventilation Systems are the combination of CO ventilation and smoke control in underground car parks.

Smoke control in the event of a fire:
Careful project planning allows us to use the jet fan system not only as a means of CO ventilation and mechanical smoke exhaust, but also as an effective means of smoke control. By utilising fully reversible impellers, the thrust direction of each individual fan can be controlled in order to contain the smoke within the affected area and to direct it to the nearest exhaust point. This keeps emergency exits free of smoke and prevents smoke from contaminating non-affected areas of the car park. Depending on where in the car park a fire is detected, the standard direction of airflow can automatically be reversed so that the air supply inlets can serve as fume exhaust points should they be nearer to the location of the fire. If required, the control logics for this emergency ventilation mode can be designed and programmed by Wolter. This direction-controlled containment of fire gases allows for effective fire-fighting, as the location of the fire remains visible and can be safely approached by fire-fighters from the upstream side of the airflow.

System controllability allows efficient operation:
The Impulse Ventilation System can be automatically controlled in a way that it adjusts the required ventilation volume contingent on the current occupancy level of the car park. CO concentration is continually monitored by an adequate number of CO detection heads spread throughout the car park. As long as pollution limits are not exceeded, individual fans in designated areas of the car park may be switched off, thus saving energy and lowering the noise level within the building.

Lower energy consumpion reduces operating costs:
Given the almost continuous operation of the ventilation system throughout the year, a possible reduction of energy consuption represents a considerable potential for lowering operational costs. Ducted ventilation systems, usually designed as a compromise between required air volume, installation space and installation cost, cause high air velocities and subsequently high pressure losses in the ducted system. The ventilation fans must operate against this pressure drop and will consequently absorb more power. In the context of a ductless Impulse Ventilation System, the architecture of the car park itself serves as the air duct. Air velocities are much lower and there is no resistance caused by a ducted system. The total amount of energy consumed by an Impulse Ventilation System is therefore comparatively low.

Applications:
Jet Fans are available with uni-directional as well as fully-reversible impellers of diameters 300, 315, 355 and 370mm, providing almost the same thrust performance in either direction.