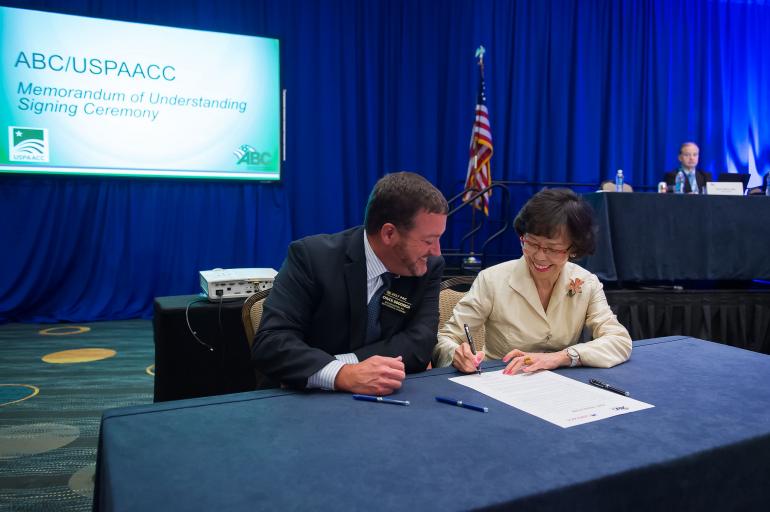 ABC and the U.S. Pan Asian American Chamber of Commerce (USPAACC) signed a memorandum of understanding calling for the two organizations to work jointly to ensure that all contractors have a fair and equal opportunity to compete for and win contracts to build federal, state and locally funded construction projects. The agreement was signed by Chuck Goodrich, ABC 2017 chair, and CEOs Mike Bellaman and Susan Au Allen, respectively, during ABC’s board of directors meeting on June 21.

An initial area of focus for the two organizations is urging congressional action on the Fair and Open Competition Act (H.R. 1552 /S. 622), which would prevent the federal government from requiring or encouraging project labor agreements (PLAs) on taxpayer-funded construction projects. Government-mandated PLAs steer construction contracts to unionized firms and prevents 86 percent of the U.S. private construction workforce that does not belong to a union from working on public works projects, driving up the cost of construction between 12 percent and 18 percent, according to a series of academic studies. Twenty-four states already have similar legislation ensuring fair and open competition in government contracting on the books.

“Associated Builders and Contractors and USPAACC share a commitment to promote political, legal, regulatory and legislative initiatives that foster open competition, create economic opportunities, train a competitive labor force and encourage open competition in construction contracting,” said ABC President and CEO Mike Bellaman. “This will benefit both bodies of memberships and ensure that taxpayers get the best quality product at the best possible price for schools, hospitals, roads and other public construction projects.”

"For America's construction industry to remain competitive, it must continue to diversify its supplier and workforce by attracting more Asian Americans to the industry,” said Susan Au Allen, National President and CEO of USPAACC. "Our country thrives when our increasingly diverse businesses and workforce operate in a free market environment that is conducive to achieving the highest levels of personal and business performance. Asian American-owned firms bring a large variety of knowledge, skills and perspectives to the marketplace. They are not signatory to unions, and the vast majority of Asian American craft professionals do not belong to a union. Public policies that discourage competition from qualified firms and workers has a disproportionate impact on USPAACC members.”