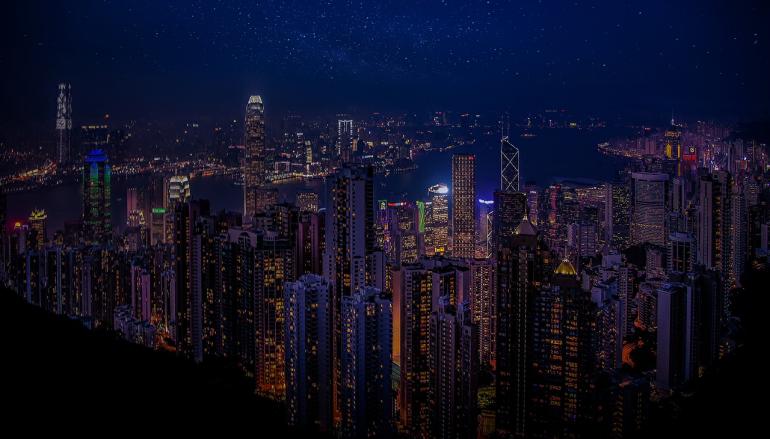 China’s district heat network – which supplies heat from central locations – is the world’s largest: in 2015, it consumed more energy than all of the United Kingdom. But district heating is also major source of air pollution in many Chinese cities. The beginning of the winter season usually coincides with a surge in air pollution, mostly due to coal-fired boilers used in commercial heat production.

Heat in China is considered a public commodity that should be available and affordable, especially in the northern half of China, which needs heating up to six months per year. On an annual basis, pollutant emissions from coal-fired district heating represent between 3% and 5% of total energy-related pollutants nationwide. But northern cities are much more affected, as pollution from heating is concentrated there.

District energy systems are currently mostly fuelled by coal. In 2016, 33% of total floor area was heated by coal-fired boilers for commercial heat production, and co-generation (mostly coal) accounted for 51%, the rest coming from gas and other sources. 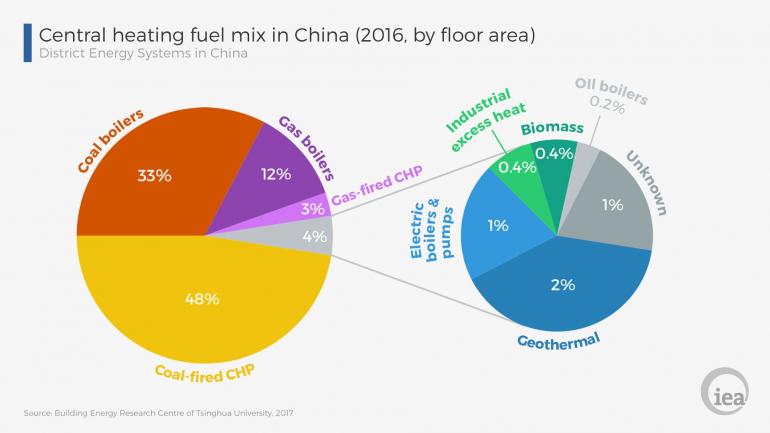 As part of the fight against air pollution, and more generally the goal of developing a less energy- and carbon-intensive economy, the Chinese government is strongly encouraging provinces and municipalities to clean up air quality through various measures. During the 19th National Congress of the Communist Party of China in October this year, President Xi pledged to build a “beautiful China” with a clean environment. Important impacts are expected with actions taken at the local level, including recent plans announced by the National Development and Reform Commission (NDRC) and other government departments aiming at cutting coal consumption for heating by 150 million tonnes in five years (2017-2022).

With the phase-out of coal-fired boilers progressing, China’s central heating fuel mix is already changing rapidly. China has ample resources to diversify the heating mix with cleaner coal use and alternative fuels, including excess heat from industry and better use of combined heat and power (CHP) capacity. Gas for heating is developing rapidly and reached 15% of surface covered by district heating in 2016 (including 3% for gas co-generation). For example, urban areas in Beijing are now entirely fuelled by four large gas co-generation plants. But around 80% of the natural gas consumed for district heating was concentrated in six provinces. More responsive supply and storage capacity are needed to cope with this significant increase in gas use for heating.

Renewables such as geothermal and biomass also have room to develop further: currently, renewable sources only contribute to about 1% of district heating, compared to 28% in the European Union. Establishing fuel supply chains for agricultural residues could contribute to scaling up biomass for district energy, especially in areas with local or nearby resources and limited supplies of coal or natural gas.

Urbanisation and greater demand for thermal comfort will continue to increase the need for heating in China. Integration between heat planning and urban planning is essential, as well as optimising the efficiency of existing systems through improved resource management and heat mapping. For instance, overheating and network losses represent around 20% of total heat production. Floor area in China is projected to increase another 40% by 2050, reaching more than 80 billion square meters, from 57 billion m² today. 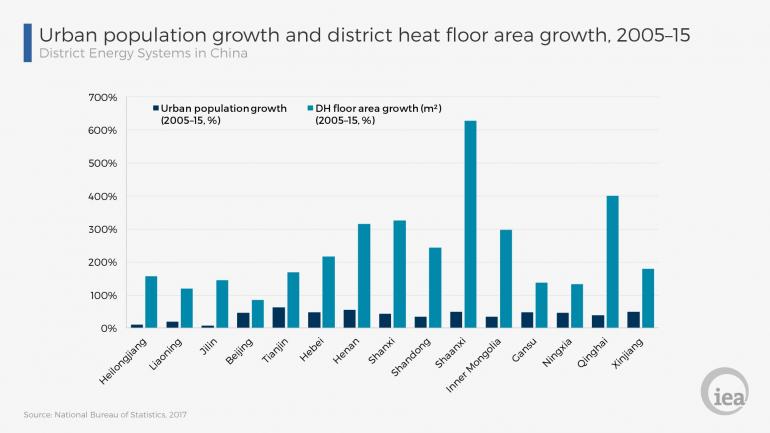 The Chinese government laid out the main orientations for China’s urban development in 2013, including a plan to rebalance urban growth by limiting urban sprawl and increasing densification of cities. The building sector offers large room for greater efficiency, both for new construction and also from renovation of existing construction.