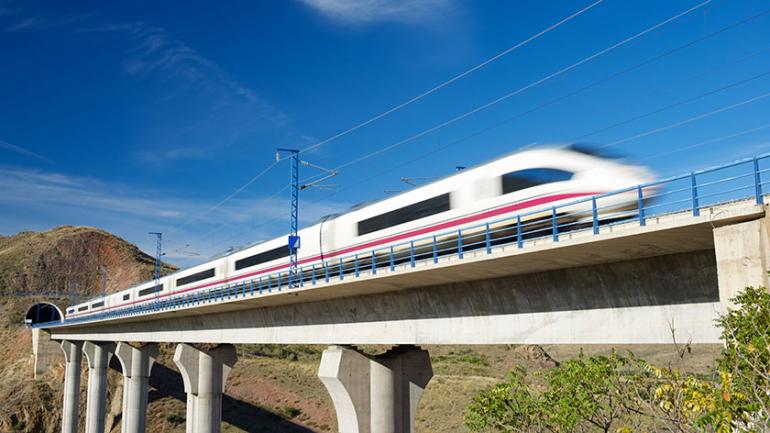 High-speed rail (HSR) passenger activity totalled 625 billion passenger kilometres in 2015 with China, Europe and Japan together accounting for 95% of the global total. HSR is also the fastest growing passenger rail transport service worldwide – while global high-speed rail activity has grown steadily since 2005, growth accelerated to nearly 70% over 2013 to 2015, mainly as a result of a surge in China.

This shift to HSR represents an opportunity as the rail sector can play a key role in reducing CO2 emissions from transport, particularly in being able to displace short haul aviation.

The efficiency of rail is significant in relation to other modes of transport. For example, the railway sector accounted for over 6% of global passenger transport activity in 2015, yet was responsible for less than 2% of transport final energy demand and just over 4% of CO2 emissions from the transport sector. This is due to not only better energy efficiency of the rail sector compared to the road sector, but also a continued increase in rail’s dependence on electricity – and particularly renewables.

Despite these obvious efficiency benefits, the share of passenger transport by rail has fallen over the past decades in Europe and North America relative to other modes. However, Asia is another story, representing continued growth and 75% of global passenger rail activity in 2015.

Most of this growth can be attributed to the development of primarily high-speed rail networks in China, which have seen a remarkable acceleration over the past two decades. This change was accompanied by significant increases of rail passenger-kilometres in Korea and the ASEAN region.

The HSR sector in China in particular has been growing faster and at a larger scale than in any other country. Over the past decade the Chinese share of HSR activity (in passenger kilometres) grew from 4% to 62% of the global total, reaching 386 billion passenger kilometres in 2015. With nearly 20,000 km of HSR lines in operation in 2016, China also accounts for around 60% of today’s global HSR network and 82% of the HSR track-kilometres built between 2005 and 2015.

In 2016, nearly 11,000 km of HSR lines were still under construction and an additional 1500 km of lines were planned. This will raise the total high-speed rail network extension to 31,000 km by 2020, doubling the value of 2014. The Chinese government's target is to keep expanding and upgrading the rail network so that all Chinese cities with more than half a million inhabitants, covering 90% of the Chinese population, benefit from rapid rail services.

HSR projects need to be accessible to a large volume of passengers in order to be economically sustainable, and are therefore more successful in densely populated areas. Many areas of China qualify for this because of their high population densities. Distances between Chinese cities also fall in the distance range (200 to 1000 km) allowing HSR to be highly competitive with aviation. When looking exclusively at the financial performance of HSR projects, only a select few HSR lines were profitable in 2016 including the Tokaido Shinkansen line operating between Tokyo and Shin-Osaka, the Paris-Lyon TGV line and the Beijing-Shanghai high-speed rail link.

Nevertheless, HSR delivers important economic and environmental benefits that are not directly related to project financing. One potentially significant environmental benefit is the capacity to shift passengers away from aviation, a mode of transport with much higher carbon intensity.

While overall changes in global aviation activity due to HSR are relatively small, there are several examples of how the introduction of HSR has led to significant reductions, or even the curtailment, of air traffic on specific routes. These include Paris-London, which saw a 56% reduction in air traffic volume from 1993-2010, Seoul-Busan (54% reduction from 2003-2011), and Taipei-Kaohsiung (80% reduction from 2005-2008).

Such a shift can result in major energy and CO2 emission savings, as the energy use per passenger kilometre of HSR is about 90% lower than aviation. In addition, HSR has the potential to emit very low or zero CO2 emissions if paired with decarbonised electricity generation systems.

Ultimately, HSR could be part of the strategy to meeting global climate ambitions. In fact, in a scenario aiming to meet the goals outlined by the Paris agreement, nearly all global aviation activity at short to medium distances (up to 1000 km) is substituted with HSR by 2060.

HSR tends to be competitive when journey times are shorter than or similar to those offered by aviation, a common feature for distances less than 700 km. HSR also tends to be more competitive in densely populated areas. Japan, where the Tokaido Shinkansen is one of few profitable HSR connections globally, has 127 million people living mainly in large cities with high population density along the coastal strip. This allows HSR to connect a chain of large cities so that flows between different cities are combined in a highly efficient network.

This connection of cities leads to a broader benefit of HSR: the possibility of so-called “agglomeration economies”, with positive feedbacks on economic growth and industrial competitiveness. These economies can emerge through a network of large, but not oversized, urban agglomerations. This in turn can lead to wealth redistribution, for example due to lower costs of living in satellite cities.

These recent trends of surging HSR passenger volumes in China align well with global imperatives to improve energy efficiency and energy diversification of transport. Yet bringing about a global shift of the magnitude necessary to meet Paris Agreement climate targets is a major challenge and will require adding HSR capacity at a rate beyond any observed so far.