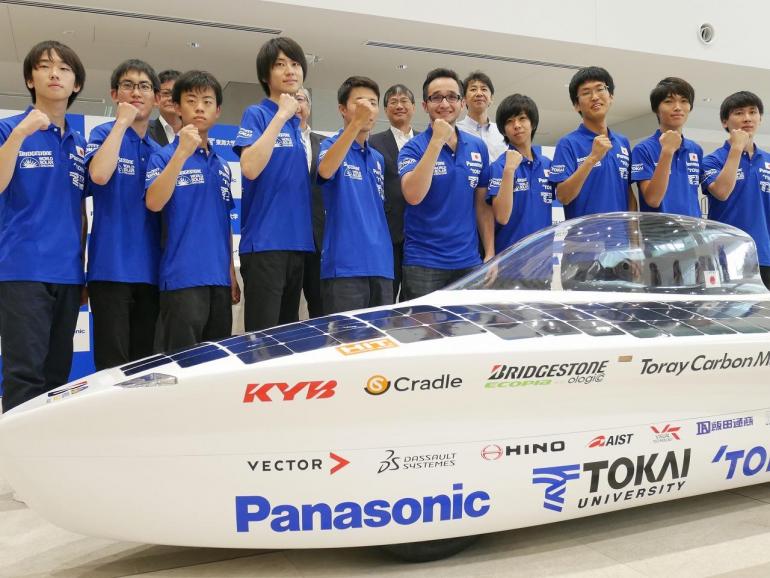 Aiming to Return to the No. 1 Spot After a Drop in Position for the Last 2 Races

Osaka, Japan - Panasonic Corporation signed a sponsorship contract to support the Tokai University Solar Car Team again this year as they compete in the "2017 Bridgestone World Solar Challenge" (WSC), one of the world's top-rated solar car races. This year, the race will be held in Australia for 8 days, from October 8th to the 15th.

Held from 1987 (every other year from 1999), solar cars compete against time in a cross-country solar car race from Darwin in Northern Australia to Adelaide in Southern Australia, a total of about 3,000 km. The 2017 race plans to have a total of 45 teams that have qualified from universities and corporations in 29 countries and regions.

From 2011, Panasonic has supported the Tokai University Solar Car Team by supplying them with advanced components, such as HIT solar modules boasting top-class power generation, and high-capacity lithium-ion batteries.

Compared with the most recent race, the main change in this year's car is a downsizing of the solar module installation area, from 6 square meters to 4 square meters. This has enabled a dramatic change to a monohull design, resulting in a reduction in wind resistance, and a stunning new appearance.

In order to secure maximum output from the smaller module area, Panasonic provided the team with R&D level technology for the first time. By using a technology called back-contact, which mounts all of the electrodes on the rear side of the solar cells, the power-generating efficiency of the cells reached 24.1% for an output of 962 watts (increasing the power-generating efficiency of the cells by 0.9% over the 2015 model).

The HIT solar module that Panasonic has supplied since 2011 uses unique heterojunction solar cells that combine a crystalline silicon substrate with amorphous silicon thin film. Compared to ordinary crystalline silicon modules, there is a smaller drop in output power at high temperatures. This positions the HIT solar module in the top class of power generation per unit area. HIT solar modules are also well suited to the race in Australia where the modules reach high temperatures due to the strong Australian sunlight.

Panasonic's lithium-ion batteries use a unique nickel-type cathode material to achieve the industry's highest level of energy density in a cylindrical 18650 size (diameter: 18 mm, height: 65 mm). This allows more of the power generated by the HIT solar module to be used to recharge the lithium-ion batteries, and enables the car to travel longer distances on overcast days with less sunlight.

*HIT is a registered trademark of the Panasonic Group.

The Solar Car Team of the Tokai University Challenge Center Light Power Project supported by Panasonic is active in one of the world's highest levels of solar car racing.