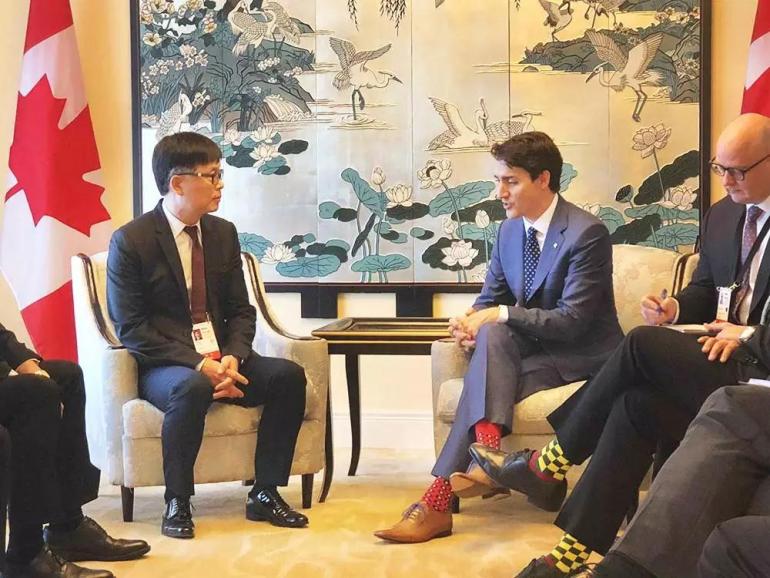 Canadian Prime Minister Justin Trudeau’s official visit to China took him to Guangzhou December 6 for the Fortune Global Forum. As the CEO and President of a Fortune Global 500 company, Paul Fang was also an honored guest. When the two men met, they discussed Midea’s progress in the Canadian market and expressed mutual hope for future cooperation in AI, robotics and automation.

“Canada welcomes investment from Midea,” said Trudeau.  He added that Canada attaches great importance to emerging fields such as digitalization, advanced manufacturing, and artificial intelligence and would implement appropriate research and talent strategies in those industries.

Paul Fang thanked Trudeau for his invitation, stating that Canada’s investment in new technology was well-known around the world and that this complemented Midea’s “twin smart” approach of Internet of Things “smart home” technology along with automated “smart” manufacturing.

As early as 2006, Midea registered its Canadian branch office in Toronto, Ontario. Since 2014, Midea’s annual sales volume of consumer electronics in Canada has exceeded 500,000 units. From January to October 2017, Midea not only achieved sales of US$170 million, but also increased overseas patent coverage in the North American country.

About the Fortune Global Forum

Since 1995, the Fortune Global Forum has convened world leaders and the heads of global business—the chairmen, presidents, and CEOs of the world’s largest companies—on the dynamic frontiers of international commerce. The 2017 Global Forum is in Guangzhou December 6-8.