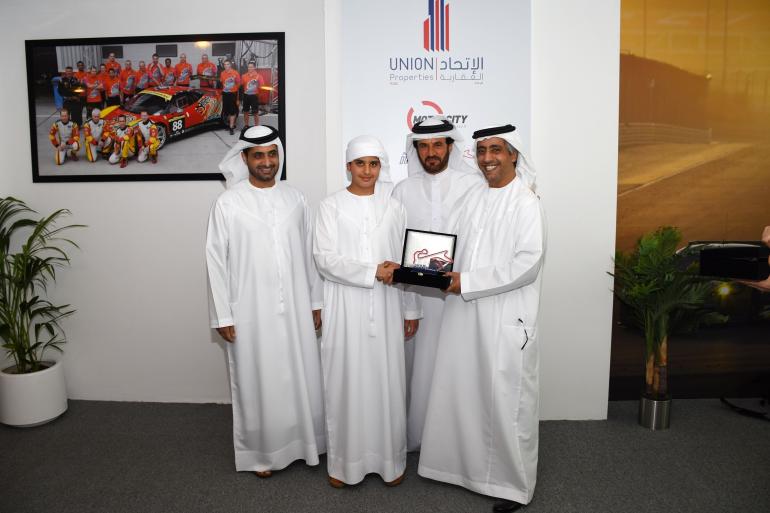 Union Properties PJSC, one of the leading real estate developers in the United Arab Emirates, recognized its sports partners during the 13th edition of the Hankook 24H Dubai endurance car race which took place at Dubai Autodrome, one of Union Properties’ developments. The event was held under the patronage of His Highness Sheikh Ahmed bin Mohammed bin Rashid Al Maktoum, Chairman of the National Olympic Committee.

On behalf of Union Properties, Nasser Butti Omair bin Yousif, Chairman of Union Properties, commended the event’s sponsors and the Group’s motorsports partners, and honored Sheikh Juma bin Maktoum Al Maktoum, President of the UAE Billiards and Snooker Association, and Mohammed bin Sulayem, Vice President of the International Automobile Federation, and presented them with plaques for their ongoing support and sponsorship of the Hankook 24H Dubai endurance race, as well as many other various sporting and racing events hosted by the Dubai Autodrome.

“We thank His Highness Sheikh Ahmed bin Mohammed bin Rashid Al Maktoum, Chairman of the National Olympic Committee, for his generous patronage of this event, which is considered one of the most highly anticipated in Dubai’s motorsports calendar,” said Nasser Butti Omair bin Yousef, Chairman of Union Properties. “We also commend our partners and sponsors of the Hankook 24H Dubai endurance race, which has become one of the most prominent events in the industry through their unwavering support over the past years, and a significant milestone in the region’s motorsports sector and beyond.

“We are very pleased to be working closely with a number of key figures involved in the participation and support of motorsports events,” he continued. “The Hankook 24H Dubai endurance race is a great opportunity for us to strengthen and celebrate our partnerships. For the past 13 years, this race has reached a high status in the world of international motor racing, and we look forward to achieving more success in the coming race editions.”

The 24H SERIES, powered by Hankook, saw the participation of 90 vehicles in 24-hour driving rotation, with 368 drivers taking part from more than 50 countries, including the United Arab Emirates.

With various competitions in 12 different categories, the “Black Falcon” team won the title with Saudi Prince Abdul Aziz bin Turki Al Faisal behind the wheel of his modified Mercedes GT3. “Manthey Racing” came in second place with the Porsche GT3 R, and “GRT Grasser Racing” came in third place with the Lamborghini GT3. The establishment and organization of the event was overseen by the Automobile and Touring Club of the UAE, which is chaired by Mohammed bin Sulayem, Vice President of the International Automobile Federation. The event and its accompanying activities witnessed the attendance of thousands of fans and motorsport aficionados.